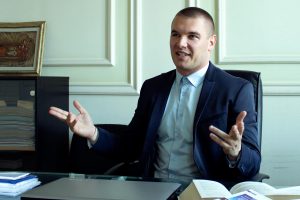 Penal Law regulates public relations in case of committed crimes. Here pertain the actions related with arrest of the suspect, involving a defendant under a pre-judicial procedure, as well as defence of the defendants at the judicial phase. Penal Law is the fundamental tier of each legal system which has been assigned functions regarding the sanctioning or acquittal of the persons involved in the penal process.

Penal Law features different principles, whereas some of them differ from the others. The first principle is the principle of lawfulness with its subprinciples, such as the legal stipulation which reads that no citizen may be sentenced if, by the time of committing the crime, the latter has not been declared illegal. An actual example is the holding of excise goods without an excise label, which a number of years ago was not envisaged in the Penal Code, in view of which only the trading in and the legal framework was amended and the law gap was supplemented. Legal stipulation meaning, more specifically, that the sanctions and the rights of persons who have committed a crime should be projected in a regulatory action. In a lawful state, the principle of democracy is of exclusive importance, which protects the entire society and all citizens without any restrictions which are based on race, gender, ethnic or political party affiliation, education, religion or other described in detail in Article 6, Paragraph 2 of the Constitution. We should also emphasize on the humanism which is a fundamental tier of penal legal science. Putting it in general and in brief, the penalized person may not be subject to physical violence or tortures and efforts should be applied after they have served their penalty to facilitate their reintegration into society and to make it possible for them to continue their normal way of life.

Different Penal Acts are available which have different functions. For instance, the Penal Code regulates the type of crimes and the size of the penalties, while the Penal Procedure Code (PPC) regulates the methodology of implementing the penal procedure from the time of the persons detention, through their transformation into accused ones during the pre-judicial procedure, to the time they become defendants, as well as other procedural moments. The Penalty Enforcement Act regulates the rights and obligations of the persons who serve a term of already imposed penalty – „imprisonment“. The Combating Minors‘ and Adolescents’ Anti-Social Behaviour Act also known as the Juvenile Delinquency Act envisages the methods of combatting the anti-legal acts of persons under the age of 18.

In the field of Penal Law, “Ivanchov & Partners” offer the following services: